Our world is changing. Our problems are changing. It's time our education system did too. Here's my take on the reforms needed in education. 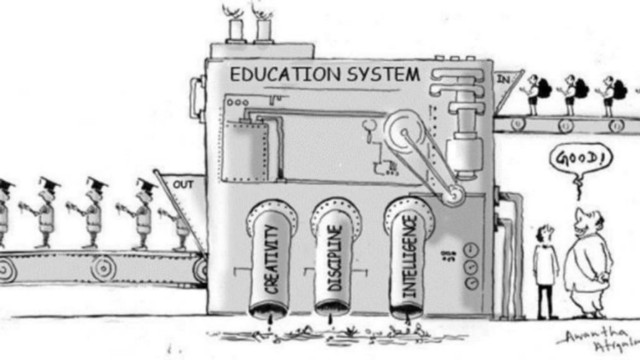 There is a storm brewing. And the rain clouds are hovering over the traditional school system. We’ve already seen the first droplets fall as a result of COVID-19, and it’s difficult to see a future where the downpour isn’t on the way.

The education system has been failing us for years. It is no secret that the outcome of the schooling process — “educated children” — is a complete mismatch with the outcome that this modern world requires.

We’re failing our children by subjecting them to this system, and we’re failing ourselves as humans by slowing down the overall development of our race, and everything we interact with.

The formal education system (particularly in America) was born mainly from religion. Martin Luther was said to be the “godfather” of this. His justification was that in order for salvation to occur, people need to read the scriptures. He realized that in order for this to happen, people need to know how to read and write. This idea spread, and by the late 17th century, Germany was the leader in the development of formal education. However, the actual schooling was not handled by the state, but by the Lutheran Church.

“In America, in the mid 17th century, Massachusetts became the first colony to mandate schooling, the clearly stated purpose of which was to turn children into good Puritans.” — Psychology Today

As the idea of education spread, employer’s saw it as an opportunity to create educated workers for their companies. At the time, the ideal qualities of a worker were something along the lines of:

Aside from the last point, which has been significantly improve on, it’s hard to look at our formal education system (mostly) and see how it has adapted to the current world we live in, and our present day challenges.

The number of children being homeschooled in the UK has more than doubled in the last 5 years, according to Forbes. In some parts of the country, that number is as high as 700%. This is only registered home-schoolers, which is not a requirement.

In the US, the current number of home-schooled students represents roughly 3.4% of the schooled population, or 2.3 million children. It’s expected that as a second generation of home-schoolers chooses the same for their kids, this number will expand to 10 million by 2030.

Clearly, home schooling is finding popularity and traction outside of it’s traditional conservative and religious roots.

Bare with me for a second while I try illustrate a point with a personal anecdote. I left high-school 10 years ago. Throughout my schooling years, I found school particularly boring. In junior school, I remember faking stomach aches, headaches, putting my forehead above the toaster to mimic a temperature — every trick in the book to get out of school. I hated the monotony of it. Pretty soon I got shipped off to boarding school.

10 Years later, and I am staying with my parents during lockdown, and we became friends with our next-door neighbors, who had a daughter in Grade 11 (17 years old). She asked me for some help with her school work.

To my shock, the curriculum was all but identical to what I learned in high school. The only difference was that she had a laptop with her, and that’s how she got her notes from the teachers — no more note-packs.

For perspective, 10 years ago…

All of this has happened, but our education system has barely changed it’s curriculum.

This, despite the fact that our world is rapidly changing, and the challenges we face are vastly different from those 10, 20 and 30 years ago.

The traditional schooling model is one dimensional. No matter the input (type of child), you get battered with information that is mostly not relevant anymore, through outdated teaching methods, and then are expected to come out a certain way (pass exams).

We’ve now reached a point in educational research that we know that all people learn differently.

The question then becomes: So, what are the alternatives?

Founded on the teaching principles of Dr Maria Montessori — the first female physician in Italy — the premise is that children are naturally inquisitive. They are born with “absorbent” minds, and will embark on self-directed learning if given the opportunity to do so.

Montessori’s are primarily at the pre-school and primary school level, and their ‘classrooms’ are prepared environments which allow children to seek out opportunities to learn on their own. The teachers are there as facilitators and observers. The children are allowed to concentrate for long periods of time on certain tasks, rather than being interrupted by a teacher-driven model of learning with class changes and interruptions— a foundation of the Montessori way of teaching.

Rudolf Steiner was the mind behind the “Steiner/Waldorf” method which emphasizes the importance of the development of the “whole child”. Steiner theorized that children developed in 7 year periods, and their education should be structure as such:

There are however some criticisms of the Waldorf method, which say that it borders on being too religious.

Sharing a lot of the same principles as the Montessori Method, Reggio Emilia also has its roots in a post World War II world. The method is primarily aimed at children aged 3 to 6.

The first Reggio Emilia preschool opened in 1945, and became popular in the US in 1991.

The Reggio Emilia way of teaching has the following features:

“Reggio Emilia is about full-blown human potential and how you support that in both intellectual and creative terms.”- Louis Boyd Cadwell (Teacher at RE school’s in Italy during the 90's)

Sudbury schools are unique in their emphasis of individuality and democracy. They take this to the next level. Sudbury students have complete control over what they do, and what they learn at school. All students and teachers vote on almost everything relating to the schooling process:

The premise is that students are capable of making sound collective decisions. In the event that they don’t, they learn through the consequences of their mistakes.

Sudbury Schools rely on the premise that students are inherently motivated to learn. Their reasoning is often backed by the idea that an infant child learns to walk, rather than spending it’s whole life lying down in it’s crib — which is a viable, and easier, option.

Predictions for the Future

The issue with all of these alternative learning methods is that they don’t align with the way companies are viewing graduates. Traditionally, you would have to go through school in order to get a certain qualification. That qualification would give you a ‘stamp’ which a company could look at and gauge how well you may be able to do the job.

That is slowly changing. Alternative education institutions like Lambda School are changing the way companies are hiring. It’s no longer necessary for front-end developers to have a secondary education at all. If you’ve got the skills to do the job — it doesn’t matter to them how you got them.

The same applies in the marketing world. If you are a creative thinker that can create designs and think laterally where no one else can — your education doesn’t matter.

There will always be room for a structured curriculum where a certain minimum amount of information is required in order to operate in a certain role — doctors sprint to mind immediately — but even still, I see the route of getting to becoming a Doctor changing vastly over the next 20 years. Textbooks and lectures will soon be a thing of the past.

Here are my four predictions for the ways education will change:

There is no better method of learning than finding out for yourself how something works. It is in the process of discovery that you cement your understanding and learnings.

Teachers will be move away from being instructors to facilitators. They will provide the resources and ask the right framing questions to create an environment where discovery is possible and encouraged.

Discovery will also be multi-faceted. There will be no ‘silo-ing’ of educational modules. A student could simultaneously  be learning about mitochondria in a cell as well as the importance of a specific plant in the larger eco-system and what it’s resource value is in the food-chain.

There will be no set teaching methods. Guidelines will be set for what needs to be learnt, and students will be free to absorb information and learning as — and when — they want to.

Closely aligned with the point above is the way the examination process will change. There will be very few written tests, where students parrot-learn information and then regurgitate it for a short amount of time, before forgetting it all together.

Testing will be based on performance in the field. You will be tested as a student based on your ability to perform what you are intended to learn. There will be a minimum set of tasks and/or skills that should be able to do/have in order to be competent in your role.

This will likely be tested in a real world environment, under mentorship.

The single biggest problem facing the current generation entering the workplace is the climate challenge. The way we are interacting with, using and abusing the Earth needs to change, or our era as human-kind is just going be remembered as another layer of fossils.

The only way to fix this ongoing problem is by starting at the grass roots level — education. We need to be teaching a symbiotic relationship with our environment, not one where we exploit the resources available to us.